I have split off my research on all things Erving to a new blog called Erving's Past. I'll be back here with more stories about our family or other topics that catch my interest. Until then, please see what I have been researching here.

Posted by Sara E. Campbell at 7:34 AM No comments:

And so, the weeks turned into months and the year drew to a close, and a vaccine arrived on the scene...

No, blogging has not been my top priority during the pandemic. It seemed like there was lots of time to get things done. I did some of the writing I had intended to do, but it is a slow process. I presented a good group of genealogy topics virtually to several societies. Another handful got cancelled and the impetus to finish the research went with them. There were a few small engineering projects, but when the opportunity to go back to Saipan with FEMA came around, it seemed like the right thing to do.

Being on a remote island during a pandemic has brought back my sense of well-being. The government restrictions have made this a relatively comfortable place to be. Masks are universally worn. Restaurants and churches take temperatures, and names and phone numbers for contact tracing. Everyone quarantines for 5 days in a designated hotel upon arrival, and doesn't join the general population without a negative screening test. As a result, we passed the 100-case milestone only a few weeks ago, with the majority of those caught at the airport. Nearly as important as the safety is the social contact available working with other people every day. Sure, being alone for most of six months wasn't as hard on me as it was on some people, but it feels good to banter with co-workers. And living on the 8th floor of a beach-front apartment is pretty sweet. Now, Zoom is working in reverse as I keep in touch with friends on the mainland.

Feeling grateful, and a little guilty. And hopeful. 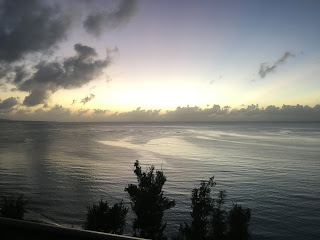 Posted by Sara E. Campbell at 1:12 AM No comments:


What has happened in a month? We remain apart. There are more masks in use, in fact, the Governor of Massachusetts has required them in public places. School will not come back in session this spring. The deaths continue at an alarming pace, though slower in some of the cities like New York than they were a month ago. Deaths in nursing homes and Veterans' homes are shocking, and nearly 50% of the total locally. The Governors continue to show leadership that isn't coming from DC. The practice of the Feds. stealing (appropriating?) protective equipment from the states isn't making it easy for them.

Carolyn is able to sit on her beach in NC, as long as people do not crowd together. She continues to work from home and do virtual therapy. Brian converses with his students online as well. Jamie is at the end of his 2 week quarantine in a motel in Juneau, and will rotate to the island to the mine for the next two weeks. Alaska has fared pretty well so far, as have many less-populated areas.

The Senate is going back to DC, but the House, with four times the population, is not. It looks like the unemployment program for self-employed individuals applies to me. I have several projects on hold in Whately, Northampton, Greenfield, and Amherst.

This weekend the sun came back and the windows were open for 2 days. Cooler temps are predicted next week. Some days are more productive than others. I miss company, but we video conference, telephone, sit in our cars to eat together apart. I can't fathom what it is like for extroverts.

Posted by Sara E. Campbell at 6:56 PM No comments:

Email ThisBlogThis!Share to TwitterShare to FacebookShare to Pinterest
Labels: COVID


How is that "writing every day" thing working out?

The COVID 19 virus is looming on the horizon. We have gone from people in nursing homes getting sick, to deaths of musical figures (also elderly), to one degree of separation with people posting about their relatives of any age in hospitals. It is going to get worse.

I accomplished quite a bit in the past few days. I reorganized the yarn stash and got it out of my room. I made moves toward organizing the spare room and Carolyn's room by getting a few unnecessary things into the trash. I went through a very old pile of fabric and sewing history, and spent Wednesday making fabric masks for the family. I still have scraps from the balloons I made for Jamie's infant room, his Halloween costumes, two skirts that were cut out and never sewn. I was happy to find some non-woven interfacing to line the masks and bias tape for straps. It was a whole day coaxing the old black singer to do more or less what I wanted it to do, but it is done. Two went to Alaska and two to NC. Brian says he won't wear it, but he got one too. 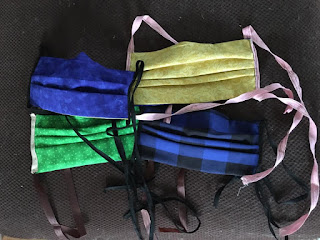 I video-conferenced with friends, family, and a committee in Sunderland. Looks like I will be doing more sidewalk design. I also recorded my Historic Maps talk for the MGC conference this weekend, and presented the same talk live via Zoom for WMGS. Last weekend I had planned on presenting at the Eastham Library (cancelled) and meeting with PGSMA Tuesday (also cancelled). The grand opening of our library was cancelled.

Except for a short trip to the grocery store, I didn't go out for food. There are still lots of options for take-out. I spent one entire day in a book. That hasn't happened in a while.

FEMA put out a call for workers via Dewberry. I did not check the box for working anywhere in a suit and mask. We will see if they have any at-home work to offer.

I feel very blessed to have three kids still on the payroll. None of them have to go out to work. I don't have to go out either. The cats are good company. I'm eating my own cooking. Except for milk, I could go a long time without needing more food, if I had to. On we go.
Posted by Sara E. Campbell at 10:44 PM No comments:


Sunny days make all the difference. It would feel much different if we were going into winter in isolation. I can only pray that in six months we won't be having a resurgence.

I had an actual business meeting yesterday with the South Deerfield Fire Dept. to plan for repaving their parking lot. No hand-shaking. I went out today to get a burrito at Mesa Verde. Supporting local restaurants is something I can do. Hand sanitizer is prominent on the counter

My contract with the City of Northampton for doing their paving inspection this summer has no start date yet, but I got a message today just to say that everything is uncertain.

Another small job in Whately is pending "when the Town can conduct business again."

I recorded a webinar this morning about historic maps for the Mass. Gen. Council, whose April conference will now be virtual. Paid work!

So many people don't have savings. It feels strange to draw on my retirement account (how did we become "the elderly?"), but good to have savings. Not to panic. My kids are secure for now. All are still on the payroll. The funding bill passed the Congress.

Every day we hear about the heroic actions of hospital workers who don't have the equipment they need to help the suffering and to protect themselves. Being at home, making my own schedule most of the time is my usual state of being. My life hasn't changed so much, but I am thankful for my choices to life a rural life. The space between me and crowds of people. We start to know that every morning we wake up and face the fear. It is a lot like the feeling of unease that started in November of 2016 when knew it would be a long time until things were put right.
Posted by Sara E. Campbell at 3:35 PM No comments:


A little writing, a little knitting, too much TV. I was going to wait out the warmer temperatures expected and not deal with the snow, but I decided to go out and get a sandwich so I had to push it off the windshield. Supporting local business - the Black Cow Burger joint. I pulled a few articles about the 1918 flu pandemic from old newspapers. So many obituaries. I think that's where I'm at, less fear for now than dread about what's to come. Greenfield Savings bank announced an interest holiday for mortgages. I will have to follow that up.

Carolyn started conducting speech therapy by video screen. I'm glad that keeps her employed. She says her father took a warehouse job. He's not in the best shape for that.

I had one video chat with genealogy friends. I'm not sure how positive that is. They're more worried than I am.


Not really manic. It is going to be as hard to title these posts as it is to write them.

Today was the first time I washed off the groceries I brought home before I put them away. Just a soapy sponge on the plastic containers: a gallon of milk, orange juice, and onion dip. Oh, and grape soda. It tastes like my fourth grade picnic. The empty paper aisle at Food City is striking, and there are signs posted to limit all purchases to two of any item. There's plenty of meat, but I don't feel that I need any beyond a few portions I have frozen.

And snow! This is not what I wanted at this point of the month. I was hoping to take a walk in the Federal Street cemetery in Greenfield. I guess I'll go back to researching, but I like to visit these people when I get to "know" them better. When I start writing when I wake up, I don't break for breakfast until later. I made it until noon before I turned on the TV today.
Posted by Sara E. Campbell at 5:07 PM No comments: 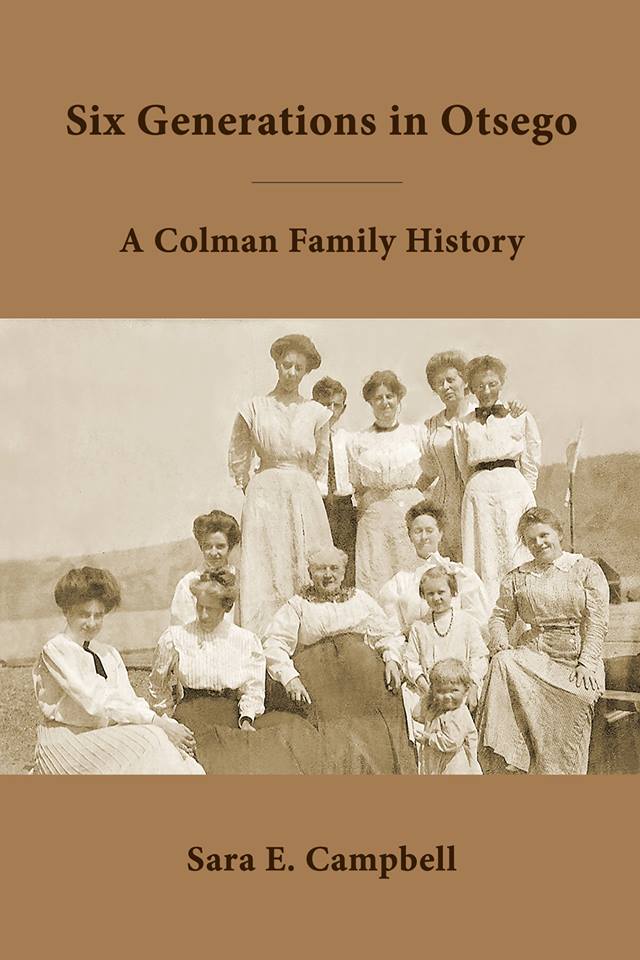 The following are some of the topics that I can bring to your group:
History Detectives
Using primary records with children to learn about local history.
Did Grandma Have a Filling Station?
Married women's property rights and their business certificates in Mass.
Land Records
Using deeds in your research.
Why Should You Take a DNA Test?
The basics of what the commercial tests reveal.
Secrets of my Vault
Overlooked municipal records.
A Polish Odyssey
Case study of immigration during WWI.
Irish Genealogy
The on-line search just got a lot easier.
Missing Persons
Using census records to find family.
They Didn't Change His Name at Ellis Island
Using immigration records to lead back to the old country.
Researching Women's Lives
Tips for finding documents about women in the past.
Civil War Case Study
Civil War era records of the Wall Family in Holyoke, MA illustrate how an immigrant family can be documented.
One Cotton Sock, Unfinished
Probate records can greatly enrich your research.
Beyond the Shaking Leaf
There is more to genealogical research than the big Dot Com.
All text & photos copyright © 2009-2022 by Sara E. Campbell.

Sara E. Campbell
Western Massachusetts, United States
I began my genealogical quest in 1990, spurred by a gravestone my mother found in Richfield Springs, NY. How many generations separated me from Samuel and Nabby Colman? Where had they come from? Thus began many weekends spent in libraries, requests to Town Clerks for vital records, tromping through cemeteries, and now--journeys through the internet and virtual meetings with other "cousins" on a similar quest.